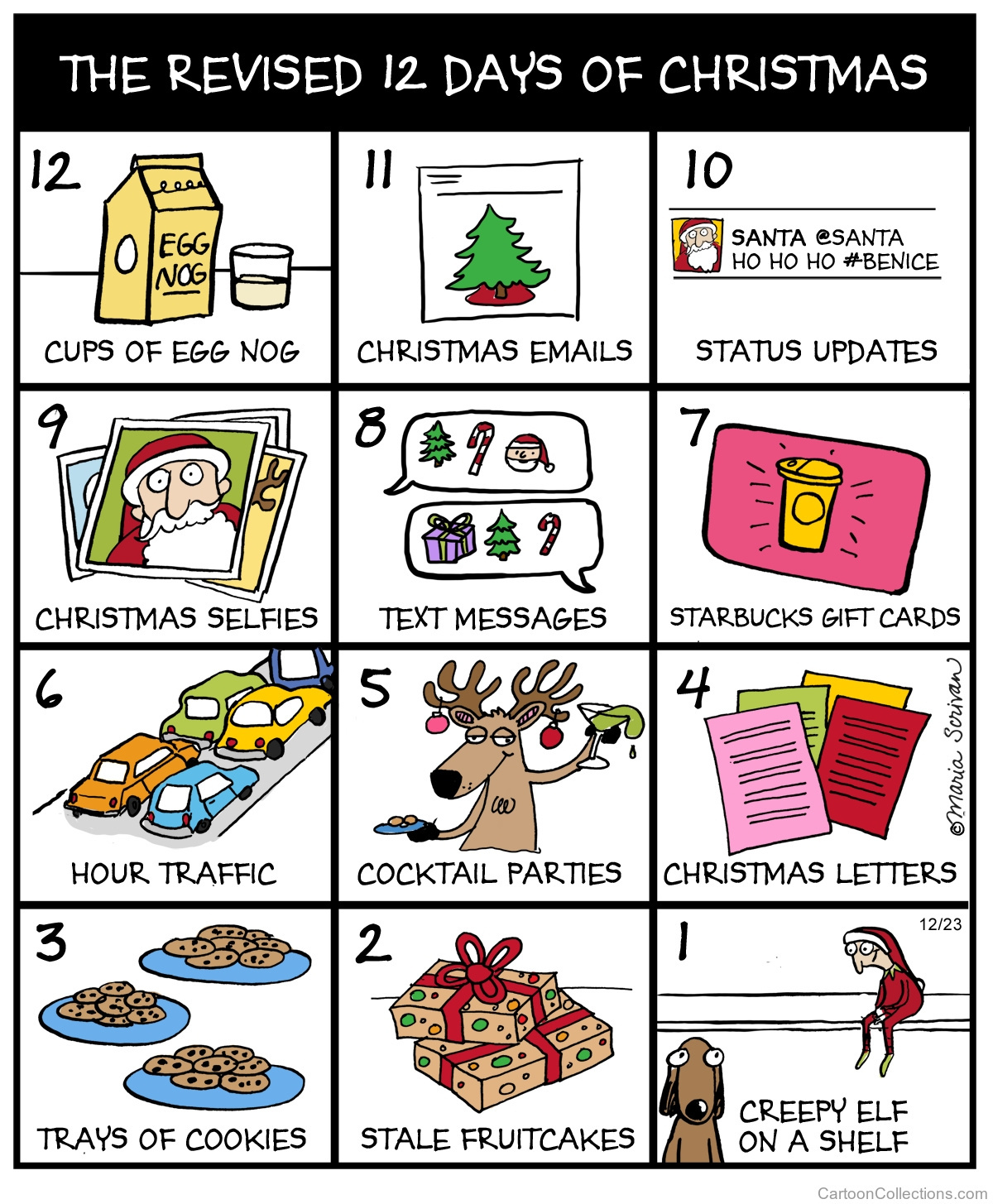 As noted by commenters during the course of the Twelve Days postings, and in the Addenda section of that post itself, sometimes a familiar comics source will touch on the Twelve Days song lyrics, illustrating and hopefully finding a joke in the lists of gifts. Sometimes this has even taken the form of a series of daily appearances for a half-dozen or even a full dozen strips.

“MGG” had the start of a run in 2011, concluding at Five with a kind of recap/roundup:

And a bonus Sea Shanties comic:

And a bonus Sea Shanties comic:

This didn’t mean they were burnt out on the Twelve Days Song material altogether, but later appearances were not as extensive. Here is a singleton from 2016 touching on first and third day:

The OTM series or singles referencing the Twelve Days song seem to encompass an almost-full series carried out over two years. The second year had a postscript of an attempt to return many of the canonical gifts at a department store returns window. Then there was a singleton on the twelve drummers, and some later repeats in color.

Then in 2003 they pick up the story with the infamous “apricot sauce” panel for Seventh Day:

Yes, we used those plumbers in our own run-thru!
Here, from 2004, was an OTM singleton but with content based in the Twelve Days gifts:

And the 2002 series included a detached postscript of an attempt at the returns window.

We couldn’t locate an extensive series from the Twelve Days song for the “Argyle Sweater” strip, but they did have some separate panels that relate to it. Both these examples are from this year. We used the “ten lords a-leaking” (sent in by Andréa) in the course of the run of our Twelve Days thread. And after that, a nice example of a single-panel comic taking on multiple gifts from the song; here instead of a department store returns window, it’s a food ordering window.

This series, from 2006, proceeds normally (so to speak) thru five, then jumps ahead to twelve to get it over with! (Oh, and do we need a geezer clue for “Prince Albert in a can”?)

Our little experiment is called on account of pandemic, with the score Death 21, #TeamPinocchio 7.