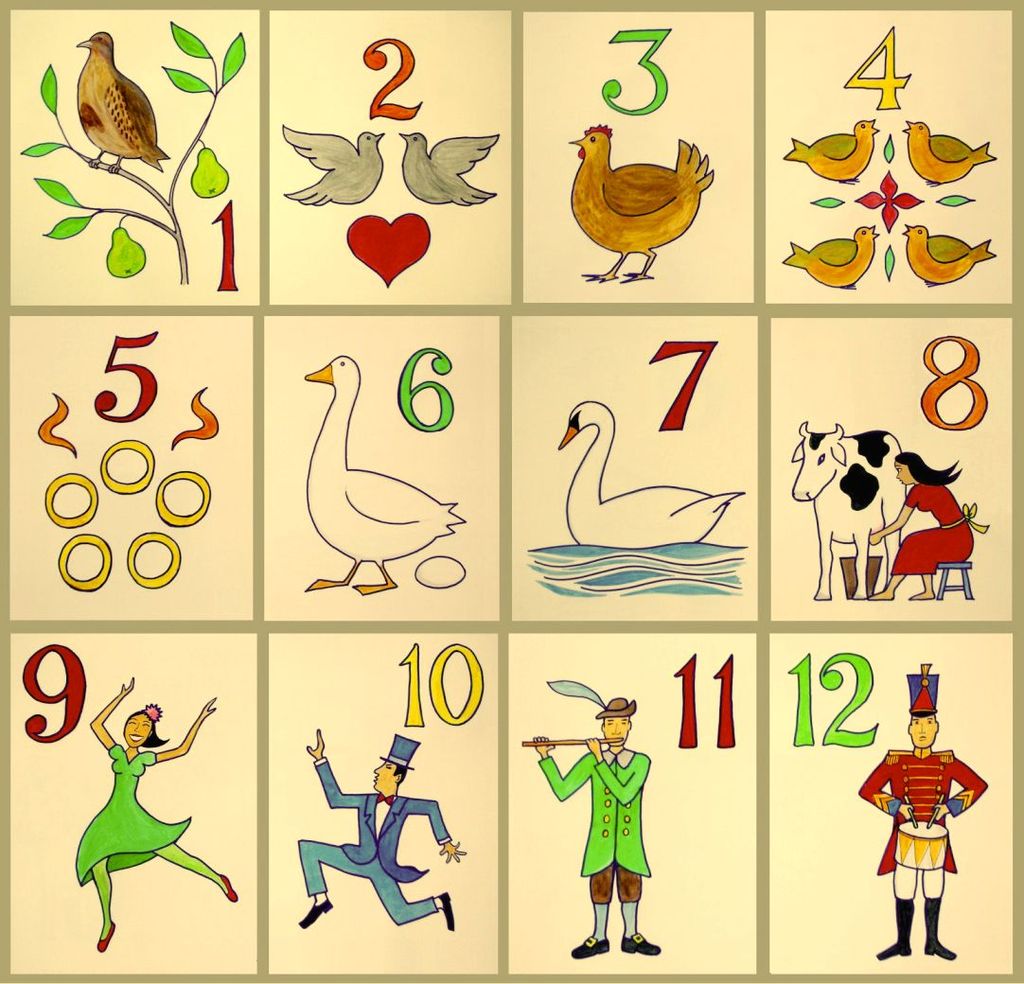 For those into timpani, here is Part 1 of 3 of a tutorial on changing and tuning TIMpani heads, by TIM Genis of the Boston Symphony. A little inTIMidating as he starts off with saying it is simple, and showing the ten products you will need. Fun as this is, it isn’t the one I was looking for — let me know if you find one about the excitement of receiving the delivery of the new “skins” and the start of the installation, from a big-name orchestra percussion section.

But maybe not everybody loves that boy:

And from the Eleventh Day

And a bonus on the plumber == piper theme!

And from the Tenth Day

And from the Ninth Day

And from the Eighth Day

And from the Seventh Day

And you can have a listen!

And from the Sixth Day

And a bonus of six more geese laying — or at least being encouraged to do so.

And from the Fifth Day

And from the Fourth Day

And from the Third Day

And from the Second Day

And still around from the First Day

Comics and other images were contributed by Rob S., Andréa, Kilby, and other readers.
The Liz Climo panel for Six Geese was picked up from a discussion on Arnold Zwicky’s blog, which takes an interest in analyzing the language of comics.

“Mother Goose and Grimm” has more than once run thru the twelve days, with different levels of punning. Usually they run these *before* Christmas Day, as a sort of countdown; and skip weekends. (We at CIDU have followed the traditional pattern of starting on Christmas Day and counting forwards until 06 January.) The 2012 series of MG&G, for interest, started with the first day on Wednesday, 12 December 2012, here. The “two hurtled gloves” was used here in draft (until the tee-shirt with the hybrids showed up) and was from the 2011 series, which started on Monday, 19 December 2011, with a “Partridge Family” joke., and did not go on for all twelve.

“Off the Mark” similarly had full or partial series around 2002, 2003, and a one-shot in 2004. These also took a pre-Christmas Day quasi-countdown approach. This strip also gives a nice example of a one-shot panel or strip referencing several of the Twelve Days gifts via some gag like the store returns window seen here — with variations seen pretty often. Our 11 plumbers plumbing came from one of these OTM series. This very recent “Argyle Sweater” also puts a long (but not total!) list of the items into one transaction, in this case a purchase rather than returns (and for eating!).

“New Adventures of Queen Victoria” has had a series, with jokes about the accumulation of gifts. (As faithful reader Deety let us know, back on the First Day!😀 ) It seems to be used for reruns; the 2020 version started with the First Day just on 21 December. A GoComics comment for the Second Day entry answers one of the usual math questions (below) and nicely shows their work for each kind of gift. The 2006 run may have been the original (the dates in the drawings match the publication dates), but it runs for a five-weekdays-plus-Saturday span only, jumping from a nervous Fifth Day to a sudden escape with a Twelfth Day intervention.

After completion of this thread on 05 January, we will make a new post, as a postscript, to sample or present some of those partial or full twelve-day series from familiar comics.

Other kinds of presentation, and Math

The featured image at the top of the post puts all twelve days together in a grid of boxes, with a representative for each kind of gift in the day’s box. That one is straightforwardly traditional and plain representations, but there are good examples of satiric or political-editorial intent in that format, such as this Ted Rall. After completion of this thread on 05 January, we will make a new post, as a postscript, to present a few of these 12-icon layouts.

For a detailed account of the history of the song and variations in the gifts accumulated in the lyrics, see the Wikipedia article. After completion of this thread on 05 January, we will make a new post, as a postscript, to present the table of historical lyric variations from that Wikipedia article.

Maybe someone can find and link the math-problem treatment of summing the total number of each kind of gift, on the assumption that the gifts mentioned in different “daily” run-thrus do accumulate — so that, for example there are 5 gold rings for day 5, another 5 gold rings for day 6, etc., for a total of 40. Which item has the highest total count? Which the lowest? What is the total of gifts for all kinds? Do the partridge and its pear tree count separately? If you don’t care to do the work yourself right now, here is how a goComics commenter summarized it for Queen Victoria readers. Now tell us, what is that series {12, 22, 30, 36, 40, 42, 42, 40, 36, 30, 22, 12} related to? It’s not quite a binomial expansion, or a diagonal of Pascal’s triangle …
Note from Second Day: There is a nice exposition from CIDU faithful reader Woozy on some math questions for the Twelve Days!.

And here is an interesting graphic account of some of the numbering questions:

Also there is an epistolary story parody similarly based in an assumption of accumulating quantities, in which the fair lady receiving the gifts gets increasingly annoyed in each letter, up to the cease-and-desist order. Please do find and link!
Update: Many thanks to faithful reader Shrug for finding and sharing this publication of a transcript exactly that story! And in turn, the collector who runs that blog has provided a link to an MP3 audio file of what seems to be the original radio presentation of this story.
Further: Actually, it is listed on the Wikipedia article in the Parodies and Other Versions section. If only we had been reading closer, sooner.

(And how charming that the lady in the skit turns out to be named Cynthia – pleasing for a reason you will see on Twelfth Day!)

We have been concentrating on the lyrics so intently, we mustn’t lose sight of the music itself!